News telegram channels activity before and after February 24th: the survey 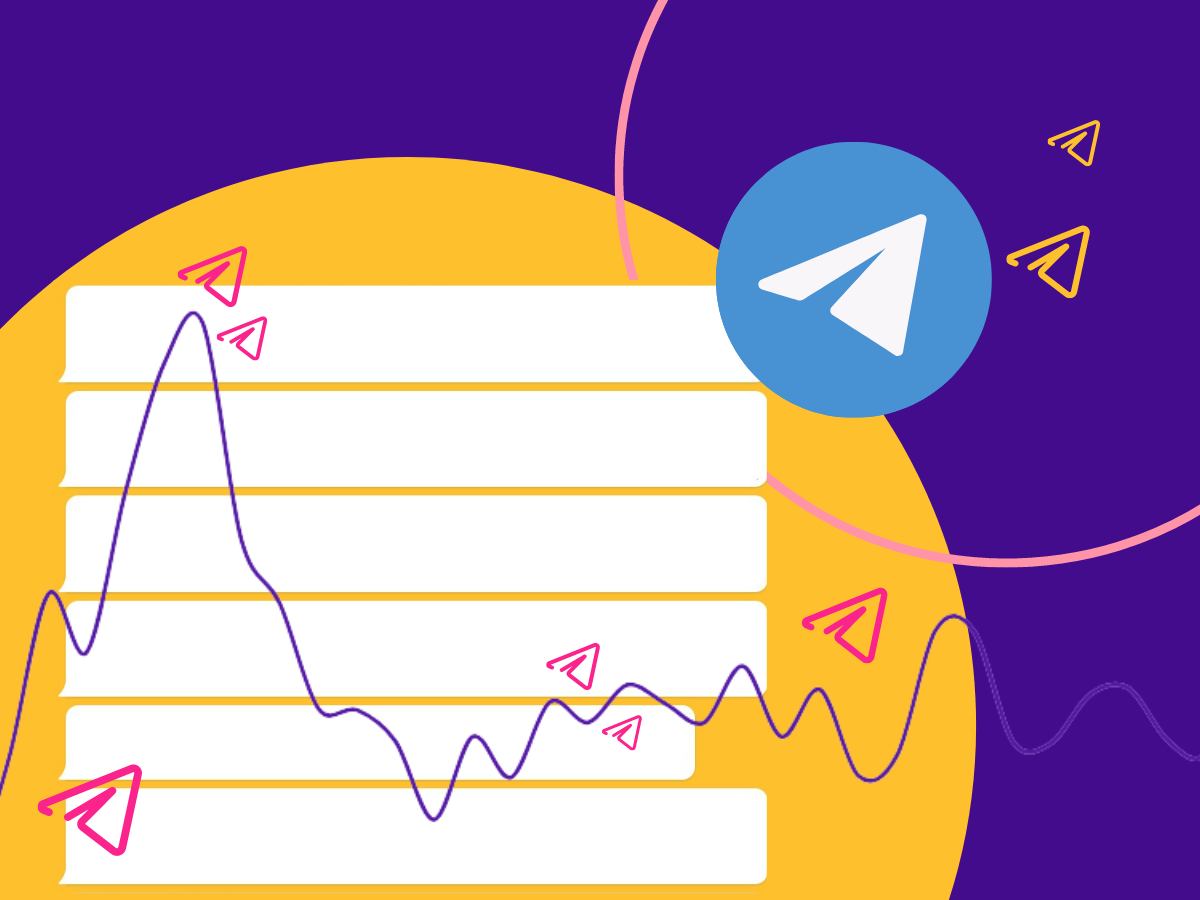 In a country where a full-scale war is going on, it is impossible to stay away from the news. Telegram channels allow you to quickly receive main information about the course of events. The LOOQME team has analyzed 11 Ukrainian telegram channels to evaluate publications activity and views dynamics. The survey covered the period from February 14th to April 10th, 2022. Data collection dated April 12th.

Word Cloud from the telegram channels included in the survey

Looking at the overall ranking for all criteria, the reverse order is observed in the first and last columns: that is the more posts, the less audience involvement (engagement is calculated as the ratio of subscribers to the post views average number).

Consider all the criteria in more detail.

‍Verkhovna Rada of Ukraine made the most posts in the period from February 14th to April 10th — 7,725, which is 15.53% of the total posts number of all the 11 telegram channels. Moreover, Verkhovna Rada of Ukraine has a significant difference in messages number with the following channel — 1,710 messages more.The smallest number of posts was published by the SSSCIP (State Special Communications / Derzhspetszvyazku) telegram channel - 1,598 (3.21%).Excluding the leader by a wide margin, telegram channels were divided into 3 activity categories by posts number: 5-6 thousand (Ukraine NOW, UP.Feed, TSN news/TSN.ua, Babel, Ukraine: operatively), 3-3.5 thousand (hromadske, SUSPILNE NEWS, SPRAVDI) and 1.5-2 thousand (Radio Svoboda and SSSCIP (State Special Communications / Derzhspetszvyazku).

‍How to build an effective strategy for tracking brand mentions‍

The graphs show the regularity that channels with a large number of subscribers have a large gap between their quantity and the number of messages views. Thus, Ukraine NOW has the largest number of subscribers among the analyzed telegram channels — 1.2 million. At the same time, 38.49% (455 thousand) are actually viewing messages. The same pattern is observed in TSN news/TSN.ua — 40.54% of subscribers read posts there. Less mass channels have a higher interaction — 50% or more.‍

‍The only telegram channel where views exceed the number of subscribers is SSSCIP (State Special Communications / Derzhspetszvyazku). While having 192,000 subscribers, its posts are viewed by an average of 241,000 users. So the level of interaction is 125.6%. Perhaps, some news were the first to appear on the SSSCIP and were unique, so they were sent by users and distributed by other telegram channels.

‍As for the dynamics of posting in telegram channels, a slight rise began on February 21-22nd, when vladimir putin recognized the "independence" of the temporarily occupied territories of Ukraine — the so-called "Donetsk People's Republic" and "Luhansk People's Republic", and the Russian Federation Council allowed the use of the Russian army abroad. However, the sharpest increase in the number of posts occurred on February 24th.During February 23rd a total of 164 posts were published on 11 telegram channels, and during February 24th — 1,114. Since the beginning of the full-scale war in Ukraine, the lowest total number of posts in the telegram channels we analyzed was 710 on April 9th. Until February 24th, the lowest number was on February 20th — only 79, which is nine times less than during martial law.

Prior to the start of the full-scale war in Ukraine, the TSN news/TSN.ua was the most active in broadcasting — 25-43 reports per day during February 14-23rd. However, after the day of the 24th, it ceased to be such a clear leader in the amount of news. After the full-scale russian invasion, Verkhovna Rada of Ukraine, Ukraine NOW, UP.Feed, TSN news/TSN.ua and Babel began to publish information most actively.‍

The highest average number of post views was recorded during the 1st week of the full-scale war — an average of 195 thousand views of a post per week. After the 1st week the number of messages and their coverage began to decline gradually.‍

Engagement before the start of the full-scale invasion was quite stable. The lines of interaction graphs in telegram channels run in parallel — some had higher, some lower engagement, but by February 23rd it did not reach even 30% of their audience, and on the 23rd, the day before the full-scale attack on Ukraine, slightly increased.

The highest engagement of SSSCIP (State Special Communications) was 1.6% at the period from February 10th to 23rd, then it was 48.14% on February 24th, reached 107.62% on the 2nd day of the full-scale war, and doubled to 238.56% on the 3rd day. Thus, the interaction of SSSCIP telegram channel audience has increased almost 240 times in 3 days.

‍In all 11 telegram channels selected for the survey the audience engagement remains at a level that is 10-80% higher than before the full-scale war. The biggest interactions after February the 24th have SSSCIP (State Special Communications), SUSPILNE NEWS and SPRAVDI. However, when looking at the graphs SUSPILNE NEWS has the most consistently high engagement — its level remains at 75-85% since the beginning of the full-scale war. SSSCIP (State Special Communications) and SPRAVDI have stronger differences in interaction levels.

The tables show the average number of publications in telegram channels during the day and the potential coverage of posts after February 24th relative to the February 14-23rd period. The percentages show how much the number of posts and coverage has increased relative to the period before the full-scale offensive.For example, the number of SSSCIP posts has increased by 323.4% since the beginning of the full-scale war, and posts reviews did by 19,239%. We see an increase in publications amount and views by hundreds and thousands of percent.The posts number of Radio Svoboda increased the least, however, this “the least” amounts to 215.1%, while the views number that increased the least has Ukraine NOW and amounts to 74.5%.

Graphs of posts activity during the day show that telegram channels publish messages 24/7. The highest posting activity is noticed from 7am to 11pm. At night, the publication's intensity decreases significantly in all channels, except TSN news/TSN.ua.

We have also collected a total amount of air-raid sirens alerts in 11 telegram channels — that amounts to 6,340 messages. The highest total notifications daily number in the period between February 24th and April 10th was recorded on March 2nd, which is 380 publications per day. The highest activity of such notifications is observed during the 1st week of full-scale war.43.56% of all air-raid sirens reports were posted by Ukraine NOW telegram channel. Other sources have a much smaller number of such notifications: from 15 to 9% by TSN news/TSN.ua, SUSPILNE NEWS and Babel, and up to 5% by other telegram channels.

‍28 million users: how social media reacted to the Save Ukraine — #StopWar telemarathon‍

‍The most popular topics in analyzed telegram channels were events, politics and war. However, the Events category includes incidents resulting from war or political action.As a percentage of channel content, SUSPILNE NEWS most often wrote about events (59.76% of its content), Verkhovna Rada of Ukraine talked about politics (41.56% of its messages), SSSCIP (State Special Communications) posted about the war  (36.27%), and the economy was covered mostly by UP.Feed (2.85%). Channels dedicated about the same share of their messages to all other topics totally — 2% or less.

Among all the analyzed telegram channels, hromadske has the largest number of own posts, not reposts — 91% of all its content. Verkhovna Rada of Ukraine has the largest share of reposts — 60%, and the highest number of reposts with comments has SUSPILNE NEWS (8%).In general, in all telegram channels (except Verkhovna Rada of Ukraine) the number of own posts exceeds the number of reposts. In total 77.4% of all messages are own, 19.3% are reposts and 3.3% are reposts with comments.

‍The posts with the largest number of views were published mostly in the first days of the full-scale war, on February 26-28th. All of them are quite emotional, indicate the importance and urgency of information and belong to the state structures official telegram channels: Verkhovna Rada of Ukraine and the State Service for Special Communications and Information Protection of Ukraine (SSSCIP). This status gives special significance and trust to the messages they publish.

10 publications with the largest number of views relate to every Ukrainian man and woman as they talk about life during wartime. All messages are warning or explanatory.

The most popular post received almost 3.9 million views and begins with a call to share: "❗️❗️❗️SHARE AS MUCH AS POSSIBLE!!!". It is followed by highlighting the information value: "Important!!!" Such messages were addressed to Ukrainians by not just a news telegram channel, but, as stated in the resource description, "Verkhovna Rada of Ukraine Official News".

‍We leave a link to the 5 posts with the most views:‍