The LOOQME customer experience: communication changes in a wartime (part 2) 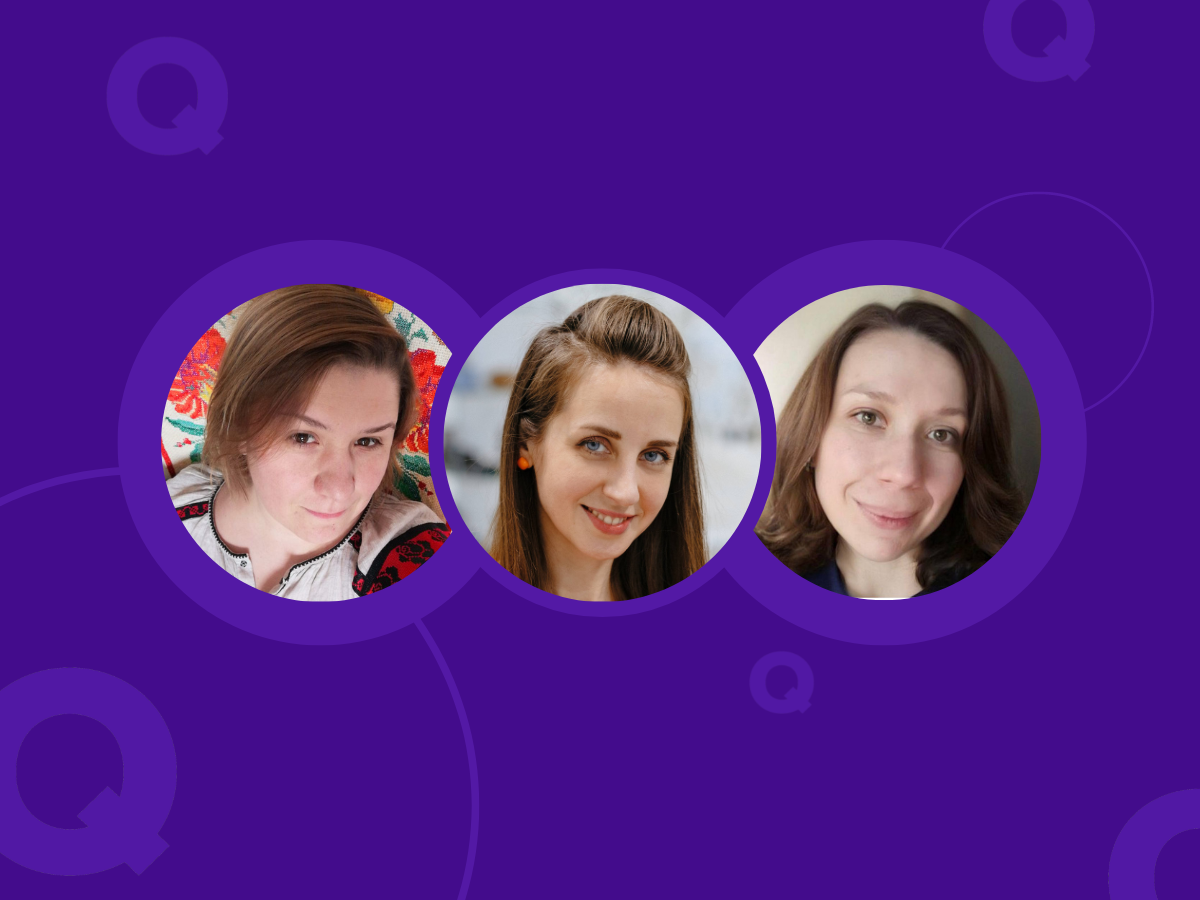 We continue to talk with LOOQME clients about communication changes in their companies after the start of the full-scale russian-Ukrainian war. In the previous material, we’ve discussed their experience with Olena Osypchuk - Head of PR SOCAR Energy Ukraine, Liliya Fatalchuk - MEX a member of Havas, and Yuliana Chyzhova - Head of Communications of the American Chamber of Commerce in Ukraine.This time we share the experience from Oksana Kovalchuk - PR manager at Foxtrot, Olesia Koval - Head of communications at Transparency International Ukraine, and Lilia Marachkanets - Head of Corporate Partnership and Communications Department, ASTARTA.

‍Oksana Kovalchuk, PR-manager, Foxtrot‍1. How did you change your communication strategy with the outbreak of the war?The context has changed radically, so the communication plan has also undergone significant transformations. We suspended all offline and online marketing communications, image projects(some of which we have already resumed). At the same time, it was important not to fall off the radar in the information field, to have a clearly defined position regarding the actions of the Russian aggressor (such as our first "The enemies are foxed" message), to stay in touch with our audience, and deliver relevant information promptly.

‍2. How has your direct communication with customers changed?

‍It has probably become more balanced. Foxtrot has more than 12 million customers. It means that some are currently protecting the country on the front line, some - saving lives in hospitals, and others - volunteering or working on the home front. So, we must consider these things when building messages. First, we should personalize content depending on the communication channel. Secondly, we carefully approach each topic of the publication, letter, and press release to arouse interest and empathy without doing any harm.

‍3. How long did it take you to reformat communications in the new realities?

‍The situation itself developed in such a way that it was necessary to react to new realities very quickly.We immediately decided where to pause and where to communicate even more actively than we used to. The latter particularly regard social networks and a close relationship with the mass media, journalists, and professional associations. We also maintained continuous communication inside the team, which is not new for us, because PR people always work 24/7.

.1) speed and openness - the company works and quickly conveys information on the specifics of work in wartime;2) balance between relevance and appropriateness - to understand and intuitively feel what and when to communicate but what to refrain from;3) monitoring and analysis of the effectiveness of communications is an integral part of the PR profession at any time, especially during crises and unforeseen situations.

‍5. Briefly describe what your company has become in the past four months.

‍‍1.How did you change your communication strategy with the outbreak of the war?

‍I will be honest, in the first days of the war, no one quite thought about changing the communication strategy. We are an anti-corruption organization fighting for transparency and accountability in the public sector and helping to strengthen anti-corruption institutions. Obviously, this was not a priority at all in February. However, we understood that we had to work and relate the events to our objectives.We kept asking ourselves how we could be useful and how to strengthen Ukraine at that moment. In the Ukrainian segment, we focused on useful and relevant content. We also informed the foreign audience about the state of affairs, advocated with the sanctions team, and worked on the exit of businesses from Russia.Having somewhat adapted, the organization began to shift its focus as we continued the readjustment. New challenges came up. For example, due to the closure of all registers, some of our activities became impossible, particularly in the areas of procurement or court decisions. We focused on seizing Russian assets abroad, sanctions advocacy, and the regional component.Now we are on yet another lap of this marathon. TI Ukraine has partially returned to the function of a watchdog and is developing new work formats. Our communications team is studying new topics and looking for new tools. One of the latest focuses of the organization is the effective and transparent reconstruction of Ukraine, which is impossible without the involvement of a number of audiences both locally and abroad.

‍2.Have the markets you worked in changed since the start of the war?

‍Since we do not work on regular markets, as we do not sell goods or services, I would rather talk about our target audiences. Transparency International Ukraine provides expertise based on research and analytics. Our target audiences include decision-making centers of various levels in Ukraine and abroad. The influence of the international audience increased significantly. Their requests and needs changed after February 24. We reacted by “repurposing” part of our communication. The frequency of international digests increased. We began to translate all our communication outputs, not just the priority ones.

‍3.How long did it take you to reformat communications in the new realities?

‍In fact, "new realities" include different stages. During the first days, part of the team, despite the shock, stayed in touch and continued to work in between trips to shelters and even in shelters. They were mostly talking about the war and looking for ways to support Ukraine at the international level. Over time, the organization more clearly defined the new priorities. We detailed the communication processes, changed the list of topics, most of the team found a permanent shelter and began to return to active work. Right now, it seems like the number of tasks is only increasing.

‍4.Name three rules for your company's public communications after February 24.

‍Do not harm Ukraine and the people.First, take a breath, and then communicate.Check the data, trust only reliable sources.

‍5.Use three characteristics to describe what your company has become in these two and a half months.

‍1.How did you change your communication strategy with the outbreak of the war?

‍The first thing we did was step up to the task right away. We, like all Ukrainians, had no time to think. We made the decisions quickly. Communication in the first hours of the russian invasion consisted of taking care of all the workers: calling, writing, and making sure that everyone was alive and well. Astarta team works in seven regions of Ukraine. It was important to understand how people felt, and what the situation was like in each region.I remember that at around 10 in the morning we called a Teams meeting with communication specialists and social workers and jointly updated the communication strategy. From its results, it became obvious that we should aim all communication and interaction at helping and supporting our colleagues, partners, and our communities – all those in need.In the early days, we involved psychologists and psychotherapists and held group lectures-consultations. We sent out internal emails with various useful tips on how to behave during the curfew and where to find the bomb shelters. We did not disappear from social media either. We remained active to show that Astarta also stands with Ukraine.It is especially important that we helped all willing employees and their families to relocate to safer places. Our regional offices equipped living quarters on very short notice. We accommodated both the Astrata employees and those who turned to us for help.In March, the Believe in Yourself Charitable Foundation launched the Common Help UA https://commonhelpua.org.ua/ humanitarian project. Astarta and many international and Ukrainian companies, public organizations, and activists partnered up and jointly supported the humanitarian front by helping Ukrainians.We temporarily put all the pre-war plans on hold. I am talking about large-scale communication projects in magazines, newspapers, and online resources. Instead, we focused on relevant topics and channels that guaranteed speedy and direct communication with our people - social networks, phone calls, and messengers.

‍2.How has your direct communication with customers changed?

‍Communication has not changed, because we were already as close and honest as possible with our partners. It has simply become more versatile. We clearly formulated our position: the top management remains with its teams in Ukraine; Astarta continues its activities and will do everything possible to support the economy of the country and Ukrainians. We proved this by concrete actions: paid our employees in full and on time and paid taxes to the budgets of all levels. The company has not laid off a single employee.

‍3.How long did it take you to reformat communications in the new realities?

‍A few hours. I am not exaggerating here. It seems to me that in the back of our minds we all understood that there would be a war. Yes, we did not want to believe it, to accept such a possibility, but we were preparing. The maximum unity of the team helped to act as a whole organism. Synchronized as much as possible.

‍Working together. The forte of our company is a united team. This is exactly what we broadcast in our communications. We are ready to help all those who need it and call to unite in the work towards Victory. You could read this message between the lines not only after the war but also throughout all 29 years of Astarta's activity. After all, it is an ecosystem partnership.Being useful. We are convinced that, even before the war, we all read only useful sources, as the information space was already overwhelming. It is true now more than ever. We try to provide information that will help people not to lose hope and has practical application.

‍Having timely communications. We do not do much planning now, because we do not know what might happen in the next few hours. This is our reality. It motivates us to keep up with the newest updates and act depending on the situation. To be present and not become disconnected from reality.5.Use three characteristics to describe what your company has become in these four months.We have always been an actively operating business. Through thick and thin. Our company is turning 30 next year. We have experienced many crises. Now it is the war. Let's hold the line. In such a difficult time, Astarta does not shun its country and does everything for the Victory.